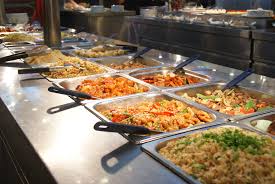 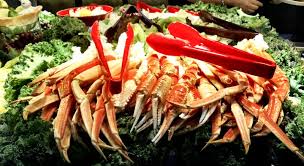 Buffet is my favorite option of dining out, not because I am cheap as my wife has always complained, but because it offers such a variety of foods that no other places are even close to giving me a sense of fulfillment and accomplishment.

I believe everyone has a buffet strategy.  My strategy is thorough and systematic, comprising of a preliminary survey of the restaurant, a careful screening of the menu, a well-planned route to retrieve foods, a calculated selection of foods – and ultimately, a possibly minimum payment to consummate the dinner.  But you always need to look out for the unexpected things that might ruin your whole dining experience.

Last Saturday night, my wife had booked a table at Mandarin Buffet – which I strongly opposed since it would cost us each 5 dollars more on Saturdays – but it was her idea, I accepted it nevertheless.

We arrived at Mandarin Buffet 15 minutes earlier – my idea of getting settled down properly before dinner - because that was how long it would take me to place my three boys, aged at seven, five, and, one and a half respectively, at the table.  A girl at the restaurant, after quickly checking with a computer screen, with a standardized greeting, started to lead us to our table.  As soon as she turned her back, as planned, and with a shake of my head, I motioned my wife to take the older boys to the serving table to get some foods to avoid wasting any time, while myself carrying the toddler and following the greeting girl.

Upon arriving at our table, the greeting girl, turning back and, in great surprise, discovering that only I, with a toddler under my arm, was following her, hesitated a moment as if not sure if she should start her routine introduction of the restaurant.  Without waiting for her to say anything, I plopped the toddler in a high chair and, at the same time, thanked her and skillfully expressed that we did not need any special drinks and that free iced water was just fine.  The girl started rolling her eyes when I asked her if there was any milk at buffet for babies.  Anyway, no harm in asking.

My wife came back with my sons, each holding a plate with some appetizers on it.

I went directly to get my favourite – crab legs, the only thing I would eat at buffet. There were several people already lining up beside the crab utensil. The lady in front of me picked several crab legs, debating if she should select several meaty ones, but she had to give up the idea under my disapproving watch, probably thinking she could always come back for more.  I snatched up the pincer she put down, starting to select fattest legs in the utensil.  I noticed she was standing there and watching me in shock.  Sorry, I didn’t play by the rules.

I returned with two plates full of crab legs. Crab legs became the core of my strategy once I knew how expensive they were in grocery stores. That was why I never understood some people, like the one who was sitting at an adjacent table, her choice of foods including chicken wings, potatoes, fried rice, dumplings and a slice of pizza that was pathetically as thin as a piece of paper.  For ten dollars, I could get her these things enough for her to survive a whole week. I would never allow my stomach full of such worthless junk.

I barely finished one plate of crab legs when both of my sons needed something more to eat.  Reluctantly, I took them to a table for the desired foods.

“Daddy, can I have some pizza please?” My seven-year old son whined, looking longingly at those pizza slices and French fries on the other table.

“No, pizza is junk food. Didn’t your teacher tell you that? You should eat healthily.” I said authoritatively while putting some shrimps and clams on his plate.

Our dialogue had drawn some approving smiles from people around us. I also put some roasted lamb on the boys’ plates.  Who wanted cheap pork and beef when we had lamb cost three times more? Of all the vegetables, I picked mushrooms and green beans and avoided bean sprouts and tofu. To me, their functions were merely to help decorate tables and pretend a variety. Besides, we had been eating them during the week, as they were staples at home.

Plates full, the boys followed me glumly back to our table.  I didn’t care how they felt as long as they had enough calories for the next week. That was buffet all about, wasn’t it?

Finally, I resumed eating crab legs in great relief that no one would bother me now.  The crab shells quickly piled up in front of me.

More “healthy foods” for the boys and more crab legs for myself.

When I came back, it was my turn to keep an eye on the toddler as my wife went to get some fruits.  At this moment, the toddler was very bored and became restless.  He was persistently trying to stand on the high chair.  Using one hand pressing him down and the other vigorously assaulting the crab legs, I must look a lot like a huge mantis munching on a pile of monster spiders.  The toddler started screaming and was trying to push my hand away in protest.  To buy myself some time, I started emptying my pocket for things that could be used as toys and then I kept shoving into his hands my cell phone, credit cards, coins and car keys – anything, wishing they could somehow magically calm him down for a moment.  He was not impressed and, in a fury, threw everything in all directions.  I realized the mistake I had just made – I wasted more time running around the table, picking up my paraphernalia and smiling apologetically at everyone around me.  When I came to my seat, in great horror, I found the toddler was wildly brandishing knives and forks, and was about to throw them.  I quickly put the cutlery out of his reach before he had a chance to turn this wonderful dinning place into a crime scene.  The other boys were not helping. They each put two chairs together to form a temporary bed and curled up on it.

Great! But the scene was very tempting. I would like to lie down somewhere myself to ease my bulging stomach.

I felt my perfect eating plan start to fall apart.

“What are you doing? Do you think this is a hotel?” I was embarrassed by the boys.

“Dad, I am really full and my stomach hurts a lot.” My seven-year old said imploringly.

“Me too!” My five-year old agreed earnestly.

My wife came back in a complete shock seeing the mess at the table.

“Can we just enjoy the meal, just for once?” My wife snapped.

“No, buffet is a war. Us versus them!” I nodded my head toward the restaurant staff.

“Hey, boys, washroom? When you come back, you can eat more.” I tried to be cheerful.

“No---” They protested in chorus. Boys wanted to go home now.

My wife flagged down a waiter and asked for our bill.  I left my wife to pay the bill after putting all the loose coins in my pocket on the table as tips, and then walked outside with my boys, relishing every morsel satisfactorily.

My wife caught up with us when we were tottering toward our van in the parking lot.  All of sudden, I thrust the toddler into my wife’s arms and started running back toward the restaurant.

“What? I have your wallet and car key.”

I was already ten yards away and yelled back without turning my head, “I got to get those fortune cookies!”

• Hahaha, you are an excellent story-teller as always..:) -beautifulwind- ♀

• Ha,ha, you version pretty much summarizes my story. -hammerheadshark- ♀

• Great, bro. You embody the true spirit of a buffet warrior -marauders- ♀

• Don't learn from the guy in the story.:) -hammerheadshark- ♀

• I wasn't thinking anything when I wrote it. -hammerheadshark- ♀

• It is used frequently in newspapers and novels. -hammerheadshark- ♀

• this is exactly how it should be used -bmdn- ♀

• One more thing before I leave. About "food" and "foods" -hammerheadshark- ♀

• A great one! Like your writing style, it is very smooth and hila -rockcurrent- ♂

• In addition, I like buffet. It saves time, and has lots of freed -rockcurrent- ♂

• You bombed me up, if not to an extinction. -hammerheadshark- ♀

• Funny and hilarious, a good one ! -yingyudidida- ♂