Facebook Billionaire's Girlfriend Priscilla Chan Has Big Week Too (and Not Because of Mark's Money.) 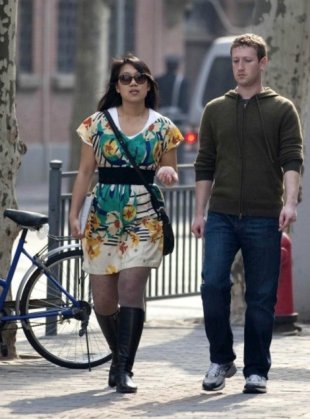 (Reuters)Mark Zuckerberg isn't the only one who's had a big week. On Monday, Priscilla Chan, the longtime partner of the 28-year-old Facebook founder, earned her medical degree from a top institution in the country, just days after inspiring a revolution in organ donor access. Also: her boyfriend just turned his first job into $21 billion dollars as of this morning, so that's cool too.

So far it's been a good month for Priscilla, the Harvard alum, who met Zuckerberg at a campus frat party almost a decade ago. On May 14, while the tech world marked Zuckerberg's 28th birthday, Chan was picking up her degree from University of California, San Francisco's School of Medicine, and even icing her degree with membership into the exclusive National Medical Honor Society.

While her boyfriend's expertise seems to be in working the market into a frenzy, Chan's specialty is in pediatrics. Already, her medical experience is saving lives on a large scale. Earlier this month, Facebook launched a new feature allowing users to add their organ donation status to their profiles. Zuckerberg credits the idea to Chan. "She's going to be a pediatrician, so our dinner conversations are often about Facebook and the kids that she's meeting," Zuckerberg told ABC News. After a few particularly heart-rending accounts of children in need of organ transplants at her hospital, Facebook's CEO developed the donor tool and effectively enlisted more than 1,000 new donors in a matter of days, according to Donor Life.

Photos: Mark Zuckerberg and Priscilla Chan on vacation together

It was a shift for Zuckerberg's brand, more often linked to lawsuits and financial speculation than saving lives. But 'Cilla,' as her boyfriend calls her, is in many ways Facebook's better half. The woman not so much behind the man, but running parallel, with equally bold strides. It's a new improved model for the so-called billionaire's wife...make that partner.

Despite rumors of an engagement two years ago, Chan and Zuckerberg aren't married. That means his big-time earnings today won't go directly into her pocket. Not that she hasn't experienced some perks. Living in low-key domesticity with their dog, Beast, the 20-somethings recently upgraded their digs to a $7 million Palo Alto home with a massive kitchen and plenty of privacy. They've also traveled to Vietnam and Shanghai for romantic vacations (that sometimes turn into work for Mark). If anything, her boyfriend's IPO explosion could have been more of a challenge than a boon. Chan reportedly has strict rules about weekly work-free dates where the couple can forget about Facebook. Zuckerberg's recent investor campaign may have put a dent in that routine.

But overall, Zuckerberg's cash crop could only be Prsicilla's gains should the couple decide to wed.
If you ask Donald Trump, and unfortunately someone at CNBC's Squawk Box did, Chan would walk away with a chunk of change in the event of a pre-nup free divorce (that's jumping the gun a little, no?)

If they divorced, says Trump, "she's hits the jackpot like nobody...I could see the lawyers and the lawsuit right now. Without her brilliant decision-making, he would have never come through. She advised him, she made dinner for him, she's entitled to at least $10 billion."

This is all assuming that Chan even wants to wed, no less divorce, Zuckerberg. Not everyone thinks, or dates, like Trump. For now, it seems Chan's big concern is saving the lives of kids, and that's probably one reason why her unfathomably rich boyfriend loves her. As the world stares slack-jawed at Zuckerberg's accomplishments, he's doing the same with his girlfriend.

After Priscilla earned her degree Monday, Mark posted the following message for her on Facebook.