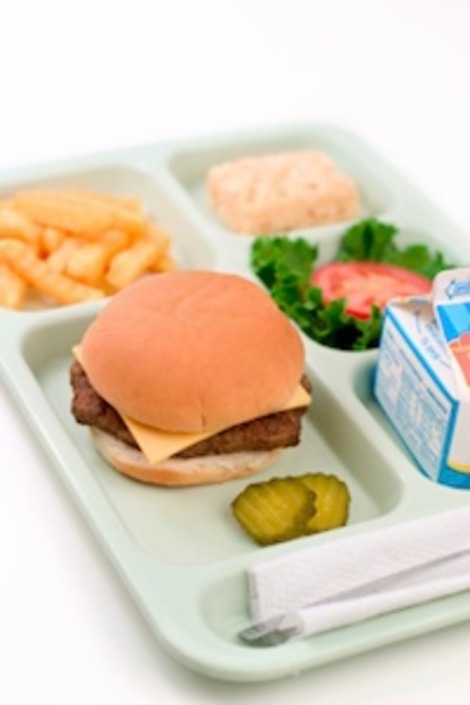 "pink slime" burger? McDonald's and Taco Bell have banned it, but now the United States Department of Agriculture (USDA) is picking up 7 million pounds of beef containing ammonium hydroxide-treated ground connective tissue and meat scraps and serving it up to America's school kids. If you thought cafeteria food was gross before….

Related: What You Need to Know About the New Meat and Poultry Labels

According to TheDaily.com, the term "pink slime" was coined by microbiologist Gerald Zirnstein, formerly of the USDA Food Safety Inspection Service. He first saw it being mixed into burger meat when he was touring a Beef Products Inc (BPI) facility in 2002 after an outbreak of salmonella. "Scientists in D.C. were pressured to approve this stuff with minimal safety approval," Zirnstein told The Daily.

"Pink slime," which is officially called "Lean Beef Trimmings," is banned for human consumption in the United Kingdom. It is commonly used in dog and chicken food. Celebrity chef and safe food advocate Jamie Oliver featured the substance and called for its ban on the April 12, 2011 episode of Jamie Oliver's Food Revolution, which may have influenced McDonald's to stop using beef patties containing the filler.

Reportedly, Zirnstein and his colleague Carl Custer studied the substance and classified it as a "high risk product." Custer, who worked at the Food Safety Inspection service for 35 years, says, "We looked at the product and we objected to it because it used connective tissues instead of muscle. It was simply not nutritionally equivalent [to ground beef]. My main objection was that it was not meat."

Another issue is the ammonium hydroxide, a chemical that is used to kill pathogens such as E. coli. The FDA considers it safe for human consumption but a 2009 expose by the New York Times questioned its safety and efficacy. Some food advocates are asking for meat containing "pink slime" to be labeled. It's used in about 70% of ground beef in the US. "We don't know which districts are receiving what meat, and this meat isn't labeled to show pink slime. They don't have to under federal law," Bettina Siegal, a writer and mother of two who created TheLunchTray.com told NBC. Siegel has started a petition to demand the USDA stop using the product in the National School Lunch Program.

Would you allow your kids to eat ground beef mixed with "pink slime?" Let us know in the comments below.