The design was initially designated the Yak-41M by the Soviet military. Once testing commenced, and the two prototypes began accumulating numerous world class records, it became necessary to invent a designation for use in the west, as the name Yak-41M was classified. The designation Yak-141 was selected, and it was by this name that the aircraft became known to western allies, though officially the aircraft's designation remained Yak-41M within the Soviet military. In 1991 Lockheed-Martin entered into partnership with Yakovlev to further develop an aircraft they had always known as the Yak-141. Largely as a result of this agreement, by 1992 Yakovlev changed the aircraft's designation to Yak-141 for the two flyable prototypes. Series production in Russia could further change the designation.[9] 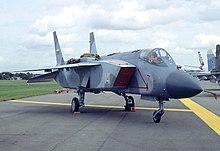 Following the announcement by the CIS on September 1991 that it could no longer fund development of the Yak-41M, Yakovlev entered into discussions with several foreign partners who could help fund the program. Lockheed Corporation, which was in the process of developing the X-35 for the US Joint Strike Fighter program, stepped forward, and with their assistance aircraft 48-2 was displayed at the Farnborough Airshow in September 1992. Yakovlev announced that they had reached an agreement with Lockheed for funds of $385 to $400 million for three new prototypes and an additional static test aircraft to test improvements in design and avionics. Planned modifications for the proposed Yak-41M included an increase in STOL weight to 21,500 kg (47,400 lb). One of the prototypes would have been a dual-control trainer. Though no longer flyable, both 48-2 and 48-3 were exhibited at the 1993 Moscow airshow. The partnership began in late 1991, though it was not publicly revealed by Yakovlev until 6 September 1992, and was not revealed by Lockheed until June 1994.[9]