“  Bad: The next argument presented on the show deals with the lunar dust. As the lander descended, we clearly see dust getting blown away by the rocket. The exhaust should have blown all the dust away, yet we can clearly see the astronauts' footprints in the dust mere meters from the lander. Obviously, when NASA faked this they messed it up.

Good: Once again, the weird alien environment of the Moon comes to play. Imagine taking a bag of flour and dumping it onto your kitchen floor (kids: ask your folks first!). Now bend over the pile, take a deep breath, and blow into it as hard as you can. Poof! Flour goes everywhere. Why? Because the momentum of your breath goes into the flour, which makes it move. But note that the flour goes up, and sideways, and aloft into the air. If you blow hard enough, you might see little curlicues of air lifting the flour farther than your breath alone could have, and doing so to dust well outside of where your breath actually blew.

That's the heart of this problem. We are used to air helping us blow things around. The air itself is displaced by your breath, which pushed on more air, and so on. On the Earth, your breath might blow flour that was dozens of centimeters away, even though your actual breath didn't reach that far. On the Moon, there is no air. The only dust that gets blown around by the exhaust of the rocket (which, remember, isn't nearly as strong as the HBs claim) is the dust physically touched by the exhaust, or dust hit by other bits of flying dust. In the end, only the dust directly under or a bit around the rocket was blown out by the exhaust. The rest was left where it was .Ironically, the dust around the landing site was probably a bit thicker than before, since the dust blown out would have piled up there.

I can't resist: another Hoax Believer argument bites the dust. “

图像在此： 请网友稍稍观察登月舱的下面是否有如上辩解的 ” In the end, only the dust directly under or a bit around the rocket was blown out by the exhaust. The rest was left where it was .“ 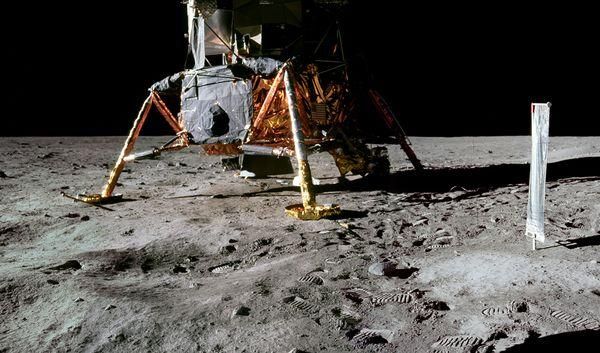