A study was performed on the antidiabetic sulfonylurea glipizide. The drug and one of three polymers were mixed in a mortar according to the ratios described in Table 1. A drop of water was added, and the mixture was kneaded until a homogenous paste was obtained. The mixture was then placed in an oven at 50°C for 30 min to remove water. The compound was then compressed into tablets which served as the basis for drug release and buoyancy measurements.

To test in vitro drug release of solid dispersions, the tablets were placed into dissolution vessels containing 900 mL of 0.1 M HCl. Dissolution studies were carried out for one hour, with samples withdrawn at predetermined intervals. Drug concentrations were assayed using HPLC methods. The dissolution experiments were carried out in triplicate, and the results are shown in Figure 1. In vitro buoyancy was also tested. Tablets were placed in a vessel containing 500 mL of 0.1 M HCl. The time taken for the tablet to rise to the surface of the dissolution media (floating lag time) and total duration that the tablet remained on the surface (total floating time) were recorded. 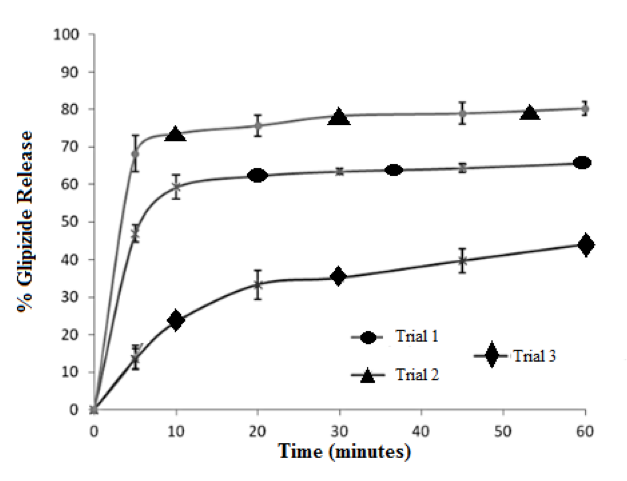 The Ksp for glipizide-cyclodextrin in a chyme solution at 37ºC was determined to be 5.8 x 10-4. Increased solubility of drug dispersions may be achieved by wetting via hydrophilic polymers, or by polymer size reduction.

(Note: all pills for the above trials have the same volume.)

Which of the following correctly lists the floating lag times for the three trials in increasing order? (note: assume that the mixing of the drug and polymer does not change the density of either component)

At this point, you may guess that the pill with the least dense polymer (trial 3) will rise the most rapidly, giving it the smallest lag time. That would lead you to choice C and you could move on. However, if you wish to do the calculations for density, they are listed below. Note that we are told that all pills have the same volume, so to determine the density of a particular pill, we must simply find the weighted average of the density of its components:

22.6% of students answered this question correctly